Posted on February 7, 2016 by biglaketinyhouse

Before winter set in and my mom went south, she sewed us couch cushions for the make-shift couch we built the winter before.  There wasn’t a lot of variety at the fabric stores in town, but we found something that we thought was suitable and I think it turned out beautiful.  Thanks mom!

At some point down the road, we will probably try to find a couch with a pull out bed that will fit in our little window nook, but in the meantime this couch is a nice cozy place to sit and enjoy the view. 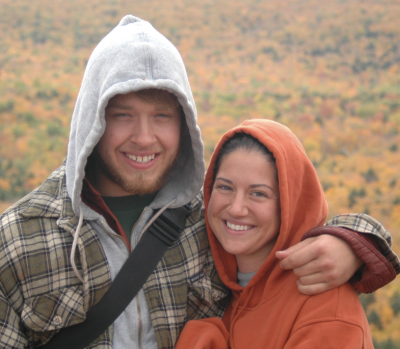 Once upon a time a Yooper (if you’re asking yourself, “what the heck is a Yooper?”; a Yooper is someone who hails from the Upper Peninsula of Michigan) and a Troll (someone from below the bridge in the Lower Peninsula of Michigan) met at Michigan Technological University. The Troll was a budding forester (a kind hearted timber beast) and the Yooper was a wildlife biologist in the making (a tree hugger of sorts)…how could this not work out!

Our careers started in Boise, Idaho working for the U.S. Geological Survey as seasonal field technicians. The reality of working in the natural resources field without masters degrees often means 6-month seasonal positions followed by six months of: what should we do, where are we going to live. After living in a tent/car for four months and moving into an 18’ RV for two months in Idaho, the Yooper and the Troll moved to Astoria, Oregon and got hitched. Oregon lasted for four months and then it was back to Michigan for three months; back to Idaho for six months; back to Michigan for six months; then on to Happy Camp, California for what we thought would be four years, but turned out to be nine months because Happy Camp was not such a happy place.

After 12 1/2 years together and 10 years of wedded bliss, the Yooper and Troll are back in the UP and making their living in the natural resources field as a forester and a wildlife research technician for the Michigan DNR in the Upper Peninsula of Michigan, on the shores of Lake Superior.

This blog documents our journey as we build a “tiny house” without any prior building experience and strive for a simpler life. Follow along on our adventure; it should be fun!